I could probably at least shoot the daughter dead a little, right? I'll just kill her a little, just a tiny little bit; she won't die from being a smidgen killed...Vicky

Vicky (ビッキー Bickī) is one of the White Suits who hijacked the transcontinental express Flying Pussyfoot on December 30, 1931.

Vicky is a man of short stature, with brown hair and brown eyes. He wears a formal white suit aboard the Flying Pussyfoot.

Vicky, like the vast majority of Ladd's followers, takes enjoyment in the act of killing and has no qualms about killing children. He is situationally aware—as seen when he notices Rachel's demeanor—and seems to place some measure of pride in his work.

On the afternoon of December 30, Vicky pays a visit to Placido Russo at the Russo Family manor along with Ladd Russo and the rest of the White Suits. Ladd announces that he and his friends are planning to hijack the limited express Flying Pussyfoot that evening for the sake of extorting money from the railroad company.

Once Ladd severs ties with Placido, he, Vicky, and the others take Ladd's black double-decker bus to Chicago's Union Station. They board Second Class without incident, and when the sun sets a few hours later, draw lots to see who will have the honor of taking control of the dining car. Vicky wins the draw, much to his delight and Ladd's envy, and is handed a copper-colored handgun.

Vicky enters the dining car in a fantastic mood, still overwhelmingly pleased to have been tasked with a pinnacle role in the hijacking. He mulls over whom he should kill first as he approaches the middle of the car, like the odd Western wannabe couple by the bar, or the two children next to them, but reins himself in after remembering that the mother and daughter are the ones Ladd is after. Though he does not see the 'weirdo' magician he and the others encountered earlier, the odd woman in coveralls by the window concerns him; she is suspiciously on guard to the point of overcaution, growing noticeably more wary when their eyes meet.

Though the sharp light in her eyes bothers him, he decides that whatever she is worried about has nothing to do with his group and reaches for the handgun tucked inside his jacket. As he brandishes it in the air, calling out, "Everybody reach for the sky!", the three armed men in black tuxedos who burst through the forward door shout, "Everyone on the ground!". At the same time, the ragged man with a knife who burst through the rear door shouts, "Hey, hey, hey! Nobody move!"

All the passengers dither in confusion save for the Wild West couple, who make sure that the two children duck and cover before dropping to the floor, sticking their hands into the air, and freezing. Vicky manages to shoot one of the tuxedo-clad men in the shoulder before being shot dead. 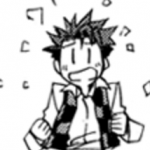 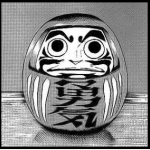