Takeshi Aono (Drama CD)
Fred (フレッド Fureddo) is an ex-military doctor who dresses all in grey to hide his scars from World War I. He is first introduced as The Grey Magician (灰色 の 魔術師 Haīro no majutsu-shi) aboard the Flying Pussyfoot in 1931, where he treats the train's injured regardless of their faction.

Fred is responsible for two important locations in New York: his medical clinic, where all patients are welcome regardless of occupation or social standing; and a poorhouse offering food and shelter to the jobless and others hit by the Depression.

Fred wears a grey coat over grey clothes and thin grey gloves, has a grey cloth wrapped around his head, and a thick muffler that covers the lower part of his face. He dresses in this manner in order to conceal his war scars, which cover the majority of his body. For the sake of his work, he carries his black medical bag with him at all times.

Ladd describes his eyes like so: "...He's got eyes that look like he could die at any time and be fine with it. Or maybe eyes like a guy who's already dead."

Fred does not discriminate between those in need of medical attention, treating everyone equally and without prejudice. As a neutral party, he involves himself in the affairs of others only when his medical services are required.

Fred has an apathetic view towards death; while he is not frightened of it, he is aware of it at all times. He is exactly the sort of man Ladd finds hardest to deal with—though if he were a woman, he would be Ladd's favorite 'type' in the mode of Lua Klein. He developed this attitude during his service in World War I, where he was heavily affected by the deaths around him—in blaming himself for the deaths of his comrades, he came to view his survival as punishment from God.

He has a distinct dislike for drug addicts, a feeling that is especially evident when he has to deal with with Roy Maddock's destructive personality. Still, he does not hold Roy's behavior against him, and supports Edith's goal to make Roy a better man.

Fred enlists in the German army as a military doctor in the middle of World War I and serves in the Battle of Verdun, which rages from February to December 1916 between German and French forces. The severe death toll on both sides leaves an indelible impression on him, as does a singular instance in which he finds himself the sole survivor of a massive battle: with nothing but corpses surrounding him, he is sure that he might have been spared such a sight if he had only treated more people.

Throughout the rest of his military service in the 'Great War', Fred accumulates multiple grievous injuries which leave his face and body hideously scarred. That he continues to survive no matter the severity of his injuries does not escape him, to the point where he is convinced he is under divine punishment. Acknowledging that escaping his punishment through suicide would surely incur a heavier punishment in the afterlife, he now believes that it is his duty to save as many people who want to live as possible until God finally allows him to die. 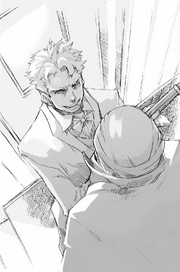 Intending to catch a train to New York, Fred is travelling through the countryside several miles south of Chicago on December 29, 1931 when he comes across an injured man named Nader Schasschule, missing his right hand and suffering from serious burns. Fred delays his plans in order to treat Nader's wounds, a lengthy process which causes him to miss his train and search for another at the last minute.

Fred manages to secure a third class ticket aboard the luxury transcontinental Flying Pussyfoot, due to depart from Chicago's Union Station on the evening of December 30. Once he boards the train, he heads for the third class car by way of second class, passing by Ladd Russo and other white-clad second class passengers in the middle of his corridor.

A few hours into the journey, Fred decides to leave his compartment and climb up onto the roof for some fresh air. He finds that men in black suits—the Lemures—have taken over his room upon his return, and elects to exit onto the car's platform instead of attempting to take his cabin back. Ladd comes across him and levels his rifle at Fred's back, ordering him to not move—only to realize that Fred is not clad in the attire of the Lemures. Fred confirms that he's not part of the Lemures' faction, and explains what happened to his room.

Ladd lowers his rifle and informs Fred that all the compartments in the second-class carriage are now empty, offering Fred the use of any compartment of his choosing. Fred smiles at the "Mister Magician" moniker Ladd uses and thanks him for his generosity, moving past him toward second class. Curious, Ladd asks what is in the bag that Fred carries—only to quickly lose interest when he finds it is merely filled with medical books and other items. Before they part ways, he advises Fred to explain he has "Ladd's permission" if any White Suits try to stop him from making use of second class.

Fred claims Cabin Three, where he rests on the top bunk bed until delinquents Jacuzzi Splot and Donny drop off their injured friend Jack and leave, not realizing that the room is already occupied. Fred clambers down to examine Jack's wounds; Jack, mistaking him for the Grim Reaper in his pain-addled state, tries to persuade him that all he needs is a little rest so that he can go save Jacuzzi in his friends. This is followed by a warning that 'Death' must not claim Jacuzzi by mistake.

Observing Jack's clear will to live, Fred resolves to treat Jack's wounds and admits that he envies Jack's determination to survive. Unbeknownst to either of them, conductor Claire Stanfield is observing the treatment through the compartment's window. Shortly afterwards, White Suits Lua Klein and Who enter the room; realizing that this room is likely theirs, Fred tells them that he is currently taking up Ladd on a "kind offer," and thanks them before returning to aiding Jack. Without pausing in his work, he asks if they could help him move his patient to the bed.

Once Fred temporarily finishes treating Jack, he recounts his past to Lua and comments on the sudden liveliness in her eyes; because of his past, he can guess that the life in her eyes means that she has finally found something she needs to do. His words spur Lua to leave the room, and as she does, he nurses a faint hope that she will return to 'being dead' once she completes her task. The thought is quickly dismissed, as he admits that he felt momentarily lonely at the thought that someone with 'his eyes' was disappearing.

After Lua leaves, Fred returns to tending to Jack with Who acting as his assistant. When Who asks Fred why he wears grey instead of white, Fred replies that pure white is bad for surgeries since it reflects light—that, and grey is a simple personal preference. He believes that grey is the best color for blending—or rather, hiding—with the rest of the world.

Who recalls that Lua said something similar once upon a time, and Fred remarks that he and Lua are very similar in their shared desire for death. However, Fred is sure that there is a fundamental difference between the two of them: Lua's eyes resemble those of certain soldiers on the battlefield, the eyes of someone who personally wants to die but has someone that they love dearly. In other words, they are the eyes of someone who is needed by someone else. Meanwhile, Fred only heals wounds out of sheer obligation; from Fred's perspective, Lua holds much more value to the world than he does.

Later on, Fred agrees to take Who on as an assistant so that he can avoid arrest alongside his fellow White Suits. Before the journey is over, Jacuzzi is brought to Fred's compartment with serious injuries.

After the Flying Pussyfoot is switched out for new cars and a new locomotive—and after a two-hour police investigation is complete—the train finally arrives at Pennsylvania Station in New York at 2:00 PM on December 31, two hours late. Fred disembarks with Who in tow, the latter of whom is carrying his luggage. Behind them straggle Jacuzzi and his friends; Jacuzzi and Jack become patients at Fred's Clinic, and are given beds of their own.

Community content is available under CC-BY-SA unless otherwise noted.
Advertisement