Baccano! 1931 The Grand Punk Railroad Vol. 1 is the first volume of the 2006 Baccano! manga adaptation, as illustrated by Ginyū Shijin and based on the original work by Ryohgo Narita. It collects the manga's first six chapters (referred to as prologues I-V and chapter 1) and was published on August 15, 2007 by MediaWorks.

It explores the various factions' respective reasons for boarding the Flying Pussyfoot and depicts their boarding and the train's departure.

In the midst of the Great Depression, there are some who have faith that the railroads crisscrossing the nation can carry them to the American Dream. However, on the evening of December 30, 1931, those same rails are stained the color of blood after the baccano that took place on the transcontinental express Flying Pussyfoot.

Before departure, Ladd Russo and a group of his friends who disguise themselves as him terrorize Placido Russo before Ladd announces his intention to hijack the Flying Pussyfoot and murder its passengers.

The Lemures, a terror cell that serve Huey Laforet, suffer an attempted coup by Nader Schasschule during a meeting. After those who are still loyal gun down their twenty disloyal comrades, the surviving thirty or so Lemures tie Nader up and leave him to die inside a warehouse that they demolish after leaving the premises. Their plan, as devised by leader Goose Perkins, is to board the Flying Pussyfoot and hold its passengers hostage to ransom the release of Huey Laforet from prison.

Jacuzzi Splot is confronted by some Russo Family mafiosi and tries persuading them to lower their weapons before his allies come to his rescue. His pleas fall on deaf ears, and his allies kill the Russos once they arrive. As they run from the scene of the crime, they discuss their plan to board the Flying Pussyfoot and steal a shipment of explosives.

Flashing forward to December 31, after the Flying Pussyfoot's journey has come to an end, a number of BOI agents examine the carnage along the tracks and confirm that there were immortals listed on the train's passenger list. The chapter then flashes back to an unnamed Immortal who is thinking to himself that if Szilard had not began eating people immediately and frightened everyone away, he would have devoured everyone by now. This was not always his plan: in suffering years of torture at the hands of the alchemist he escaped with, he has come to trust no one and thus intends to eliminate the rest of the Immortals. Now that Szilard is gone, this immortal (Czeslaw Meyer) plans to ride Flying Pussyfoot to New York City and, upon arriving, devour Maiza. Also aboard the Flying Pussyfoot will be Isaac & Miria, who unwittingly became immortals in 1930 and plan to visit their friends in New York.

On the evening of December 30, all the factions above board the Flying Pussyfoot. Additional passengers include: a mysterious man dressed all in gray; Natalie and Mary Beriam (wife and daughter of Senator Manfred Beriam); and Rachel, a woman dressed in coveralls. Just before the train departs, a car drives up to the station and Jacques-Rosé Boronial leaps out. His girlfriend, sat behind the wheel, makes sure he remembers to take a turtle figurine and sees him off. Jacques-Rosé intends to defeat the evildoers aboard the train. The Young Conductor rushes him and Chané Laforet onto the train, and the Flying Pussyfoot departs.

Later in the evening, in the dining car, Jon and Fang dissuade Jacuzzi from asking them about the train robbery—there are too many passengers in the dining car who could overhear, and neither employee is able to leave their posts to talk with him in private. Jacuzzi is then pushed into socializing with Isaac, Miria, and Jacques-Rosé; though their energy initially overwhelms him, he is laughing and joking with them in short order. In shorter order, Czeslaw thereafter accidentally slams into Jacuzzi from behind.

After Czes apologizes, he and the Beriams introduce themselves and join the others at the counter. Isaac and Miria tell everyone the legend of the Rail Tracer, a monster that chases after trains—but Isaac forgets how one can prevent the Rail Tracer from coming, much to Jacuzzi's alarm. Jon mentions having heard the same story from the Young Conductor, and Jacuzzi promptly bolts from the dining car to ask the Young Conductor what to do. In the caboose, the Young Conductor is already telling the older conductor the same story—only to discover that the older conductor is with the Lemures, who intend to hijack the train. The Lemur conductor pulls a gun on the young conductor, and the volume ends with a gunshot. 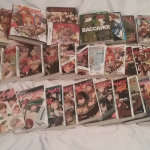 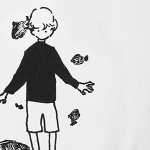